Following the passage of a 2016 referendum that would raise a projected $2.5-$3.5 billion in new sales tax revenues for the Metro Atlanta Rapid Transit Authority (MARTA)*, the agency launched its “More MARTA” program to solicit feedback on dozens of potential projects and evaluate (preliminary) alternatives. The result was this recently released proposed expansion master plan, which will soon go to MARTA’s board for approval and programming.

Bus rapid transit (BRT) on Northside Drive should be a priority for the agency as it contemplates the phasing of its expansion program, and it presents an excellent opportunity for MARTA’s first automated vehicle (AV) project. By 2026, the agency can have this route fully operational, and just in time for the World Cup.

The Federal Transit Administration (FTA) released its Strategic Transit Automation Research (STAR) roadmap in January, which outlines a five year plan to research and demonstrate the feasibility of automated vehicle technologies in transit operations, as well as assess its transportation, environmental, and labor implications

While this study wraps up in 2023, likely too early for MARTA to leverage funding or use this particular route in a research partnership, it will offer useful insights and best practices for the agency. And that said, FTA will likely incentivize technology adoption through new grant programs, possibly offsetting acquisition and installation costs of enabling hardware and software, 3D route mapping, and even personnel training. 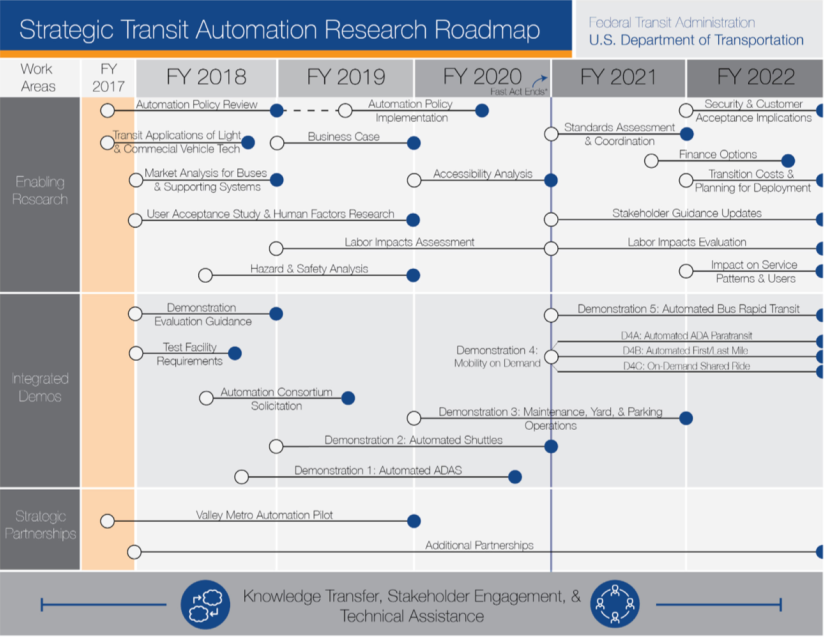 Automated vehicle technology is relatively easy to deploy for BRT versus other transit use cases, primarily due to designated rights of way. Interactions with pedestrians, bicyclists and other vehicles are controlled, though not completely eliminated. Buses would precisely align with elevated station platforms, improving accessibility for the disabled and elderly. Vehicle-to-infrastructure communications (either DSRC or C-V2X) would enable signal prioritization to guarantee headways. Reversing buses at the end of the route may require more advanced automation, or drivers retained primarily as passenger attendants (or tele-operators) could take over steering functions to navigate these segments.

The FTA roadmap’s cost estimates (performed by Volpe) for implementing level 4 autonomy in BRT are not particularly robust, deliberately omitting software development and maintenance, as well as additional cybersecurity requirements. Ostensibly this is to highlight the long-term benefits of automation through cost-savings on an agency’s second and third implementations, as the technology matures. FTA/Volpe also assumes complete removal of labor, though offers a caveat that transit operators may opt not to do so.

Northside Drive has long been a priority corridor for MARTA, and the subject of previous BRT proposals. The City of Atlanta produced a study in 2005 that recommended BRT integration in a larger Northside corridor redevelopment plan, and a Georgia Tech city planning studio in 2012 produced a similar long-term vision. Both cited it as a vital artery for the city’s Westside neighborhoods, and a corridor that was significantly underdeveloped and underserved by transit.

In 2016, MARTA submitted a TIGER grant application for a $43 million BRT project spanning six miles of Northside Drive and Metropolitan Parkway. The proposal failed to win a federal award, all the more surprising after the far inferior Summerhill BRT project unexpectedly won a FY2017 TIGER grant. However, Northside’s inclusion in the More MARTA program emphasizes its prioritization as a key transit project. The project is estimated at $160.5 million in capital costs, of which half would come from the feds, and $16 million in annual O&M costs.

Seeing as the More MARTA plan almost completely omits Atlanta’s Westside from any rail expansion, and the area has seen and will continue to see explosive growth for at least another decade, the need for a high capacity transit line with dedicated right of way is critical. By the time the World Cup comes to Atlanta in 2026, the route’s Westside, Downtown and southwest neighborhoods will look radically different.

Finally, as Northside runs adjacent to the Mercedes-Benz Stadium complex, the route offers an opportunity for MARTA to demonstrate technological prowess for hundreds of thousands of global tourists. According to the joint proposal by the United States, Canada, and Mexico, Atlanta is primed to host as many as seven matches for the 2026 World Cup, including one of the two semifinal contests.

Last year, I and four other Georgia Tech classmates** put together a series of AV proposals for Atlanta’s Midtown and Westside neighborhoods, one of which incorporated AV technology into the previously proposed Northside BRT line. We saw this project as low-hanging fruit for Atlanta because the plans call for fully-dedicated right of way on that route (unlike Summerhill BRT). As noted above, this design significantly reduces challenges for the deployment of transit AVs, namely interaction with other vehicles, bicycles, and pedestrians. We also saw a need for MARTA to start somewhere in introducing AV technology to its bus operations, given the clear long-term safety, efficiency, and labor implications of doing so.

There is almost no project-specific cost-benefit analysis that makes financial sense, and that’s okay. The objectives for any transit agency in an initial AV deployment will be a demonstration of capabilities and customer value, as well as learning how to safely deploy, operate, and maintain that technology. Unlike Waymo, GM, or Uber, MARTA does not serve private investors, and therefore cannot be expected to push technological boundaries for competitive advantage. Moreover, MARTA’s first bus AV deployments won’t remove labor from vehicle operations entirely. Elderly/disabled passengers will still need assistance boarding and exiting, and many passengers won’t feel comfortable riding without a human presence onboard. This will be a decades-long transformation.

Nonetheless, there are real benefits transit can derive from integration of AV technology, even if deployed at a slower pace than what we will see in the private sector. Introducing level 4 (or even level 3) automation can eliminate the stress of driving for hours on end, which has the potential to both increase operational safety and driver retention. Freeing up most or all of the driver’s time for customer service would improve rider experience and possibly open up new revenue opportunities (think airline or train attendants selling concessions). But most of all, initiating a path towards bus automation will begin developing the institutional knowledge and capabilities needed for more advanced implementations down the road.

MARTA can and should start on Northside.

*For clarity’s sake, I am using the MARTA name throughout this piece. The agency will be rebranded and absorbed into a successor agency, the Atlanta Region Transit Link Authority (The ATL), over the next several years.